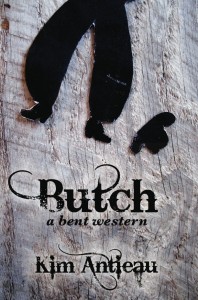 We are happy to announce the publication of Kim Antieau’s Butch: A Bent Western. This novel is a particular favorite of Kim’s. She started it several years ago and picked it up again last fall and finished it. She says she doesn’t like to pick favorites of her novels, but she will admit that Butch is one of her best friends. She’s lived with her for a long while, and now she’s very happy that the rest of the world will get to know Butch, too. By the way, she’s got other books planned about Butch and her compadres in Santa Tierra.

Here’s from the cover blurb:

Anything can happen in the weird and wonderful town of Santa Tierra where Butch McLean protects the residents of Wayward Ranch, finds lovin’ in the arms and up the skirts of her beloved Angel, and keeps one step ahead of the possibly supernatural jaguar who may or may not be stalking her. Come hell or high water, Butch will rescue any dude or damsel in distress with humor and aplomb.

But when Angel dumps her (for a man, no less), a wounded stranger stumbles into town, and the deputy is murdered, Butch may have more mysteries on her hands than even she can solve. Especially since she is suddenly plagued by memories of the terrible childhood years she spent at St. Anne’s Home for Wayward Boys. And to top it all off, she becomes obsessed with finding her prostitute mother’s suicide note.

Butch is not accustomed to being haunted by anything—and she is not interested in ruminating about her life—but now even the animals who cross her path tell her a time of reckoning is near. And when the mystery of the dead deputy leads to revelations about Butch’s own parentage, she might just have a shot at solving the greatest mystery of all: Who is she and why did her mother end up at the end of a rope?

Green Snake Publishing is riding the wave of a publishing revolution. New technology makes it possible for us to bring our electronic and print editions directly to readers. For writers, this means freedom to innovate. For readers, this means unprecedented access to unique voices and wonderful storytellers. Not to mention lower prices. Click the tabs to see what we have for your reading revolution.

SUBSCRIBE to the Green Snake Publishing newsletter and get news about upcoming releases and more.